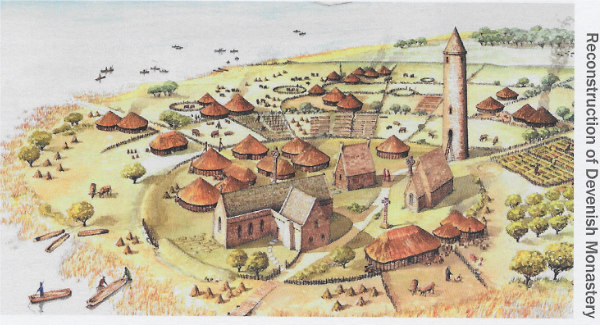 Cistercians with their highly disciplined isolated communal life were a stark contrast to traditional Irish monasticism. Nowhere is this more vivid than when we juxtapose the Anglo-Norman sites of Grey and Inch Abbey in County Down to Nendrum Monastery on Magee Island in Strangford Lough or Devenish Monastery on Lough Erne

The monks of 6th and 7th century Ireland lived as individuals in separate cells with separate tasks, they came together only for work and religious services. Furthermore, rather than being isolated from the rest of the world, they often enjoyed a lively relationship with local people, especially the Irish chiefs who supported the monasteries in return for the education of their sons and care of their hostages. Traditional Irish monasteries had no formal plan. They consisted largely of several small buildings grouped together around one or more churches. The Cistercian and Augustine monasteries of the medieval period on the other hand were laid out in a strikingly similar way to each other. The design consisted of a large central church with important smaller buildings attached, often with a central cloister. This plan was repeated throughout England, Ireland and France with the Cistercian monasteries distinguishing themselves in their extreme simplicity. Ornaments were seen as a distraction from study and a waste of money. The reconstruction of Inch and Grey Abbey below highlights the uniformity of the Cistercian design.

Help save a millennium of history?

Help in the groundsBecome a tour guide